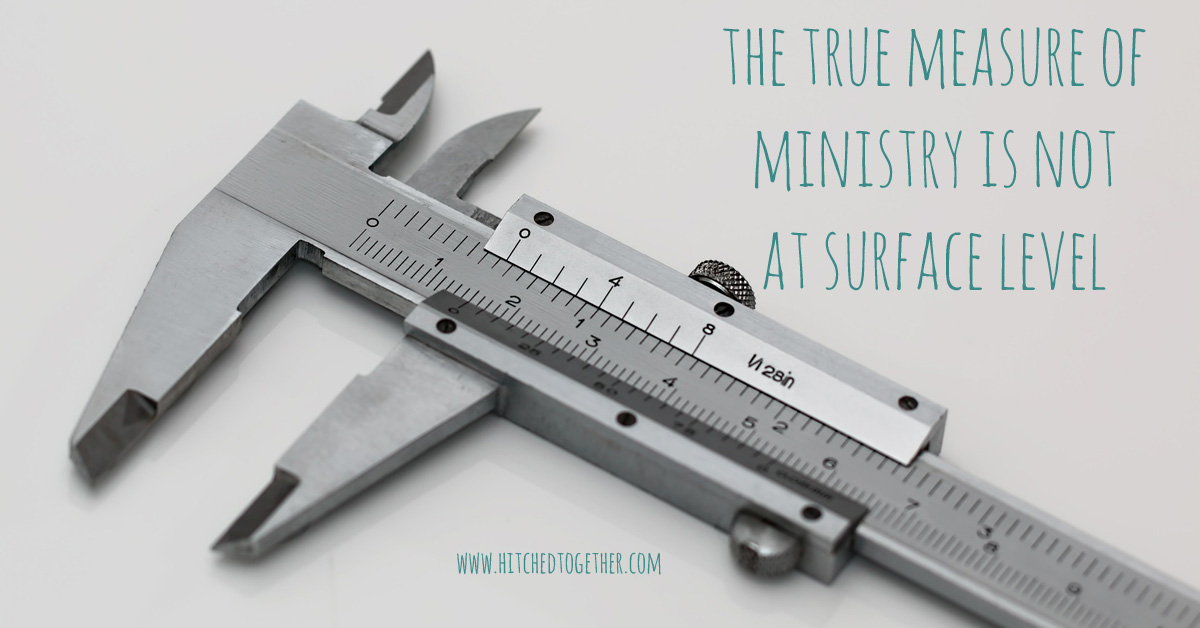 When the Numbers Don’t Move

Deflated! That’s how I felt when I stood on the scale this morning, for the third day in a row the numbers hadn’t moved! I couldn’t believe it, after all the effort I had been putting in there seemed as if there was nothing to show for it. I had been exercising every day, drinking water and eating well and yet those numbers refused to change. I pushed aside the knowledge that I felt better than I had in a long while, that didn’t matter if the numbers said something different. As I retraced my steps back to the bedroom feeling dejected, I ignored the dull ache in my muscles from yesterday’s workout. What was the point of making all this effort if nothing had changed on the scale?

Ministry can feel the same; we can focus on a particular measure of success and ignore the stuff that is going on below the surface. My guess is that if I had the ability to measure body fat and muscle, there would be a physical difference but it isn’t that easy to do that at home. I don’t know many homes where they have a handy set of body fat callipers lying around. It’s also not so easy to find a way to measure the effectiveness of ministry. If we could find a way to measure what is happening below the surface in ministry, we would be able to know without a doubt that all the effort has been worth it and will be worth the continued investment.

If you continue doing the right thing the results will eventually surface, they might be slow, but they will be there. It’s important to keep doing what you know to do. We’ve been given a promise in Galatians that we can stand on.

Galatians 6:9 ESV And let us not grow weary of doing good, for in due season we will reap, if we do not give up.

This verse tells me three things.

This means learning to change your focus. I’ve been weighing in every day but that daily measure has brought discouragement. There can be dangers in never stepping onto the scale (actually that’s probably one of the primary reasons I didn’t notice the weight slipping on in the first place) but having your focus on the numbers is not healthy.

It is good to have some ways to assess how ministry is going but don’t become obsessed by numbers. Remember there are things going on below the surface which are much harder to measure. Discipleship is one of those aspects that is difficult to measure. God’s view is very different than our view.

1 Samuel 16:7
“Do not look on his appearance or on the height of his stature,
because I have rejected him. For the LORD sees not as man sees:
man looks on the outward appearance, but the LORD looks on the heart.”

When God measures, he uses a plumb-line. A plumb-line is a line with a small weight attached to it, used for finding the depth of water or determining the vertical on an upright surface. God’s measure isn’t limited, it isn’t surface level. He doesn’t just measure what is visible to the human eye, He measures the depth. Our responsibility is to stay ‘in-line’ with His standards and obey when He asks something of us.

In the world of health and fitness, a lot of people quit before they reach their goal. There can be many reasons for giving up, but one reason is setting a goal that is simply unrealistic. When things don’t move quickly enough or grow fast enough the door to discouragement swings wide open, and we become convinced that there is no point in continuing. We fail because the enemy convinces us that we are a failure but perhaps the only thing we failed to do was to be realistic.